War and Peace, Volume IV, Parts One and Two 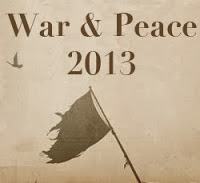 Yay-we finished part ten, only two more parts to go before being able to say that we've read one of the most famously challenging books in literature. I was actually talking with my dad about it and it's not so much that the prose is difficult (unlike, say, Henry James or Charles Dickens' crazy long sentences where I forget what happened at the beginning by the time I reach the end) as that the entire book is just so long. It looks intimidating and probably has intimidated a lot of people. This part was particularly manageable being only about 100 pages.

I was surprised by how this volume starts. We ended the previous one with Pierre getting arrested and I assumed we'd pick up back there. But no, Tolstoy makes us wait. Luckily in the interim we get to check in with Princess Marya who is falling for Nikolai Rostov and is having those feelings reciprocated while also bracing for the death of her brother Andrei, former fiance of Rostov's sister Natasha. I always forget Marya and Andrei are so closely related. I liked how Marya's goodness is really recognized here even if it is manifested by an outward beauty.

We do eventually return to Pierre who is being kept prisoner with other civilians but is treated more like an officer because he is a gentleman who can speak French. This time seems to bring him the greatest peace he's ever experienced so I guess it's not too bad? I didn't really know what to think about these moments. Can anyone explain them?

On the boring side, while there aren't many descriptions of actual battles, there are many passages about the passage of time and interpretation of history. It is not directed by great men but rather forces and it is only later that historians ascribe certain motivations and powers to those involved. We get it Tolstoy. Why do you keep repeating these same themes over and over again?