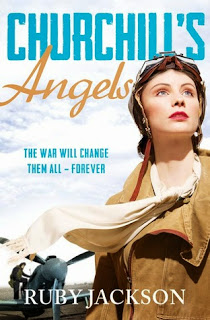 Doesn't this look like a fun book? The title's mention of Churchill brings to mind WWII and then the main character is obvious an aviator-what could be more fascinating? In the end, a lot of things as the writing for this book kept me seriously disengaged from this book.

I think I have become spoiled from reading so much YA. I feel like the vast majority (though certainly not all) of the titles in that category are narrated in first-person, giving the narrative a sense of urgency and letting me to connect deeply with her (usually female but not always) and those around her. This book largely focused on Daisy, youngest of five, the "delicate" one in the family whose destiny is radically changed with the advent of war. However the book would randomly flip over to her twin sister Rose or some other member of the family for short sections. This rapid change in perspective frequently disoriented me as I tried to figure out if Daisy was also in the scene.

Beyond that I hoped for a strong story of friendship and a sweet romance, receiving neither. There are four friends at the beginning: Daisy, sister Rose, Grace, and Sally. The latter two swiftly leave town for other employment, leaving Rose at a local munitions plant and Daisy trying to decide how she will contribute. Letters are few and far between so I didn't much of a sense for their personalities. As for the romance, it seems like Daisy is being set up for a relationship with Adair Maxwell, the aristocrat who invites her to help with his plane, who encourages her to pursue pilot studies, and who is just generally pretty lovely. But war leaves them little time to be together and absolutely none of the romantic parts thrilled me.

On a historical note, I was a bit disappointed that Pearl Harbor and the US entry into the war wasn't even mentioned as we definitely cover December 1941 in this book. Mightn't it have been appropriate for Daisy to wonder how much longer the war will last with that new influx of American might? In a different realm, this book does not hold back on the deaths. Three named characters of supreme emotional importance to Daisy are killed (plus more who also affect her) in manners that shocked me. I honestly thought at least two of them would make it through but, no, Jackson just killed them. In yet another area, Jackson's characters are of the lower class with the requisite speech patterns and attitudes. I feel like I've read more books with posh British characters so that was a change. It helped show the changes that war is wreaking, the breaking down of classes as well as the rise of women in the workforce.

Overall: What felt like an alienating choice of narration kept me from connecting with the characters as I had hoped and left me dragging through the book. There's a strong chance I would have set this book aside if I had not committed to reading it for review on Amazon.