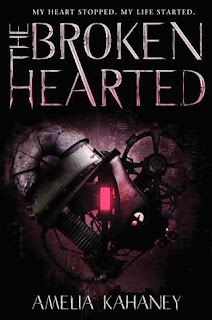 This book has not gotten a lot of love from my blogging friends, which made me nervous to pick it up. But c'mon-it features a young ballet dancer transforming into a superhero working to clean up her city, along the lines of Batman. How could anyone resist???

Well maybe I should have as I found the writing utterly engaging but lacked that necessary connection to the plot. What do I mean about the writing? I don't have a great way of explaining it but apparently HarperTeen puts crack or something equally addicting in their writing talent as this is the imprint I consistently find to be the most compulsively readable even when frustrated with characters, plot, and world-building. This book is no exception with me easily breezing through it in just a few short hours despite neutral to hateful feelings toward the characters.

Most frustrating is our main character Anthem Fleet who starts off as the perfect child of rich parents, aspiring toward a career in ballet and safely ensconced as valedictorian. Until she meets a boy who is then kidnapped. When she is unable to ransom him, she falls apart, both literally and figuratively. The literal falling apart is more related to being shot, which causes her to be saved by having a hummingbird heart implanted that gives her supernatural powers. As she attempts to avenge her boyfriend's death, she also starts to clean up the city giving people hope for about the first time in seventeen years. I found this boyfriend so frustrating. He didn't seem interesting to me and it was appalling to me that Anthem fell so hard and so fast when I disliked him so strongly. Luckily he is not in it that much though it felt like it to me as she went on and on about the guy.

Other potential love interests are Will and Ford. Will is a very popular boy at school who becomes Anthem's ex and then blackmails her into getting back together before she plays him so well. That was actually a moment when I praised Anthem's brain and choices rather than cursing them. Ford is a poor boy who strengthens Anthem's physical talents by training her in boxing and other skills (he's kind of her mentor) that will prepare her for her burgeoning role as vigilante.

Speaking of which, I tend to feel very uncomfortable with vigilante stories. Who are they to decide to implement their brand of justice? However because this seemed to be a futuristic alternative take on history, I felt less stirred. I guess I don't mind it so much when it's not my society. Also logic/realism doesn't seem to be a huge priority so I was willing to give it a pass here.

Overall: A fast easy read if you don't want to think too much and you just can't resist the concept.

Lingering (SPOILER?) question, though I am not confident I will be returning to the series:
So Regina was definitely involved with The Hope right? I mean the initials "RF+TH" certainly gave me pause plus it's been seventeen years since The Hope was around, which coincidentally is how long Regina has been dead. Perhaps Regina actually even is The Hope and her boyfriend just got all the press. If you've read, please weigh in!

Other Opinions:
Bookistry
Books Live Forever
Love Is Not a Triangle
The Flyleaf Review