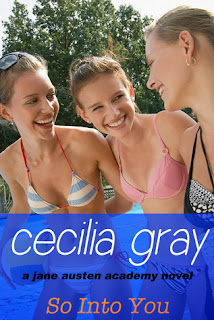 Yesterday I reviewed the first book in the series Fall for You so today I'm talking about second book So Into You, which retells the skeleton of Sense and Sensibility. S&S is actually my fifth favorite Austen novel and I don't tend to like its adaptations very much; this was not an exception. There's just something about the story that doesn't work for me so I wasn't surprised that this one left me a bit underwhelmed.

It follows the main romantic plot line from the original as well as the look at money and a sudden descent into a lower socioeconomic class. Looking at the latter first, Ellie is surprised to discover that her parents cannot afford to send her to the private Jane Austen Academy but, being desperate to stay, she manages to win an academic scholarship and get a job washing dishes. Though she misses her carefree days, she is mostly grateful to be staying even if it means she's always busy at work. I loved a little peek at the economics behind a private school education (I attended public school but a private college) as it is an expensive proposition. Though Ellie whined a bit, she is still pretty sympathetic.

Meanwhile on the romance side, Ellie has a huge crush on Edward but doesn't seem to be able to connect with him (for the same reason as in the source). Her roommate Emma plays the Marianne role crushing on actor Josh Wickham (who I originally thought might be her love interest as Josh is the name of the male hero in "Clueless"...that is until we meet George Knight who seems to have a weak spot for Miss Emma) and dramatically bemoaning his ill treatment of her while Ellie keeps all of her feelings boxed in.

Building on book one, I liked that some of the plot threads continued (such as Ellie and Lizzie's increasingly frayed friendship and the drama around the Jane Austen Academy ownership) while others were set up (Emma and Knight's romance; bringing Fanny into their group of girlfriends, which will be important since her book is fourth.) This should all pay off nicely as the series progresses.

Check back tomorrow for my review of book three When I'm With You, a take on Northanger Abbey!