Ramblings and the Week to Come 24NOV13

Well I didn't finish the book I planned to review today so I decided to switch it up and do my usual Sunday post today. That means I will post a review tomorrow and then definitely also on Monday because I also started that book and already adore it.

Giveaway Reminder:
Last week I celebrated my fourth blogoversary and since I like to party in style, I'm hosting a giveaway. It's your choice of book under $20 from the over 1100 reviews I've posted. You've still got one more week to enter and it's super easy-just leave a way for me to get in touch with you (plus bonus entries if interested.) I thank you very much for the well wishes you've left-it's enormously helpful as I ponder my future in book blogging and what I might want to change in 2014.

Celebration:
It's American Thanksgiving this week! I clarified it because I remember seeing Thanksgiving posts in October and being super confused until I realized it was Canadian Thanksgiving. Now it's ours. I do have work for three days but then it's four days off with loads of food, shopping, and Christmas preparation.

My Obsession:
I am totally obsessed with Little Mix's album Salute (I previously shared about their single "Move" which I still love but I'm finding loads of other gems) but instead I'm sharing about something that a lot of you probably already know and love. Yep, it's Candy Crush! Attached is just a screenshot I found from googling. I read a fascinating article about how players have found it super addictive and for some reason that prompted me to give it a try. I really like playing it but so far it hasn't really taken over my world nor have I paid anything for it-I'm pretty cheap so I don't foresee that changing. I also only play it on my phone, not facebook or any other platform if they're available. Does anyone else play? 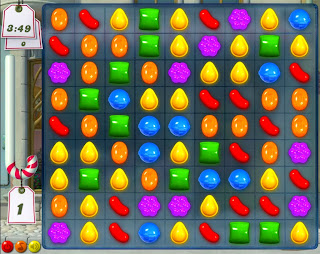 Week to Come:
Churchill's Angels by Ruby Jackson-I'm not really clicking with the writing, which is why it's taking longer than expected but I have to write a review for Amazon Vine so I'm going to push through
The Rosie Project by Graeme Simsion-this is the book I already love and I can't wait to see how it turns out
The Trouble With Being a Duke by Sophie Barnes-another Vine book; should be a good comforting romance
Fall For You, So Into You, and When I'm With You by Cecilia Gray-these are the first three books in her modern YA retellings of Jane Austen novels. You know Austen is my favorite author and I love all the different twists contemporary authors put on her books so I'm excited to check out these three.

Then Saturday will probably be a month wrap-up post so that Sunday can feature part 11 musings on War and Peace because we're done with another month! I have my December reviews roughly planned out and it looks like a pretty exciting month with my usual eclectic mix.