The Trouble with Being a Duke 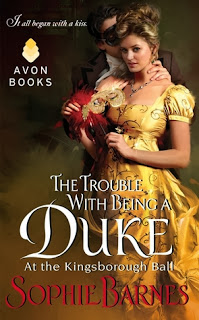 When I read the summary for this book, I got a distinct Cinderella vibe. Being that Cinderella is my favorite fairy tale retelling and that two of my earliest and hence most beloved experiences in reading romance were retellings of that story (An Offer from a Gentleman by Julia Quinn and Once Upon a Dream by Katherine Kingsley), how could I resist?

This book dives very quickly into its central event: a masquerade ball hosted by the new duke of Kingsborough, Anthony Hurst who is on the lookout for a bride. He finds her in yellow under the cover of Miss Smith. In just a few short hours, both are smitten and Hurst knows that he must deepen the connection. For her part, Isabella has grown up dreaming of attending the ball and can scarcely believe she disobeyed her parents and potentially shamed her future fiance, the priggish Mr. Roberts only to fall for the duke himself!

My biggest problem with this book is the extreme lack of conflict. Both parties are quite certain they would like to pursue a relationship. Though Isabella is almost engaged to someone else, neither of them feels a strong passion. Isabella's mother does bear an extremely strong grudge toward the nobility...but that's it. Even the duke's mother isn't that disturbed by her potential daughter-in-law being not of the gentry. So there really isn't that much tension. I feel like this could have been cut down to be a short story, as a companion novella to the other stories at the Kingsborough Ball.

Another annoyance is that it is a case of instant attraction with the possibility of becoming love. Hurst is very definitive that it's not love, yet. But he is also equally certain that it could turn in to love very quickly and is determined to pursue that possibility no matter what objections Society might put up. The other problem revolves around Isabella's mother's dislike of the rich and titled. Her reasons are teased to us before finally being revealed but there are sufficient clues to put together an accurate guess beforehand.

Overall: Perfectly pleasant characters for an okay read; it's just not one that sparks for me. Another way of phrasing it is to say that it lacks oomph.