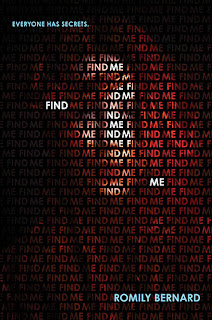 This wasn't originally on my radar until I saw some reviews that left me intrigued. I *hate* the main character's name (Wicket, abbreviated to Wick) but I love her hacking prowess and the fact that she is motivated to find a killer by love of her younger sister. I'm always down for a protective older sister (see also Everdeen, Katniss) so I requested this one.

Wick knows she doesn't fit in. How could she with a mother who committed suicide and a father on the run from police charges? Where could she belong? But she does learn she's important when the journal of her former now deceased best friend shows up on her foster family's doorstep with a note saying, "Find me." Her skills as a hacker may make her uniquely qualified to discover the identity of her killer. Though initially Wick resists, the discovery that the man who tormented the best friend in her final months is eying Wick's younger sister Lily motivates her. Can Wick discover the killer and protect her sister?

Honestly I still can't get over the name. I mean, isn't wicket a term used in both cricket and croquet? It's not a name! And then it becomes Wick, which is part of a candle! Her sister's name is Lily (Harry Potter flashback), which is a lovely name and the other characters have names I recognize but Wick is just horrid to me.

Wick as a name is horrid to me, I mean. The person is difficult at times but also quite captivating. I say she's difficult for a few reasons. One is her attempts to investigate this killer, which seemed to veer off-course sometimes. Most notably is via her romance with fellow computer geek Griff. I was not upset that she didn't immediately jump into a romance with him no matter how much he made her weak in the knees; it was perfectly understandable to me that she would be hesitant and not trust his words as hardly anyone has shown her even a scrap of kindness. But at one point, he announces that he can get the IP address and her excitement about this is derailed into flirtation and other stuff before they go back. It made me question her commitment to solving this case.

I was very impressed with myself because I pinpointed the killer almost right away with Wick also thinking it might be him early on before following other potential leads. Then we find out for sure who it is and things get intense. Even though I was anticipating a confrontation with this person, I was not sure exactly how it would play out. Those final pages are filled with tension and were more unpredictable than  As for her other investigations, it was a little choppy. She is still involved with her on the lam father's con operations due to various threats and this sometimes interferes with her other sleuthing but we didn't get much insight in to that area. I also mentioned her lack of logical investigation into the case itself; yes, it was her first of this kind but she's conducted others before and thus I would have assumed she had more skills for laying out a plan than are demonstrated here.

Overall: A predictable mystery that is lifted by compelling personalities and a final confrontation filled with suspense, leading us into a possible sequel that I would certainly be interested in reading.

Other Opinions:
Curling Up With a Good Book
Jen Ryland/YA Romantics
Rather Be Reading
Realm of Fiction