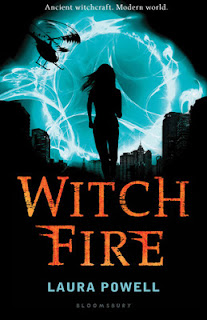 Last year, I read Burn Mark, a tale of witchcraft set in an alternate version of our own contemporary world. In that book, posh Lucas and chavvy Glory discover their abilities and set out to negotiate what those changes mean for their lives in addition to battling a larger plot against witchkind. Some of the things I liked most about that book were both main characters, which seems to be rarely the case; its clever incorporation of magic into our world; and its London setting. I wasn't sure what to expect in this sequel but I knew I wanted to read it.

Both Lucas and Glory are struggling with exactly what their powers at their young age means. Lucas' father's ambitions are diverted while Glory's coven is in disarray with witch terrorism continuing. A lead from a posh school in Switzerland sends them off to South America to discover if it's possible to remove the witch from a person and to prevent more violence and chaos.

My favorite part by far was the section at the school. It's a school for (rich) young people whose powers have manifested but have so far escaped official notice from the government. They can hide out here and be safe from prying eyes. I am pretty obsessed with boarding school settings as well as just schools in general so it's probably not too surprising that this was the part I loved the most. Not that I didn't like the other parts, just this one seemed tailor made for me.

I felt like this book really deepened the characters of Glory and Lucas, the latter who is especially conflicted about his magical abilities whereas Glory is struggling with her legacy and her long gone mother. These characters are also still deeply sympathetic and fun-I still like both of them just about equally. They're teenagers who sometimes act above their years but at other times, fall prey to their emotions and vulnerabilities. They seem very realistic for living in such a fantastical world.

Overall, I think this is a very well-done series with excellent characters. I do hope there will be a third book to build a trilogy.

Cover: Got to love how it matches the first book!