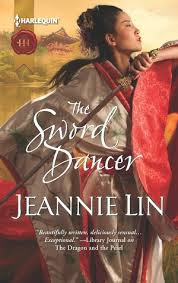 Source: Received a copy from the author in exchange for an honest review.

I've read several of Lin's historical romances before including the amazing My Fair Concubine last year, which completely blew me away. I was thus excited to return to historical China and meet some new amazing characters.

As expected, the hero and heroine were fantastic, each strong, powerful characters with tremendous physicality in addition to their growth as characters to confront the emotionally scarring moments of their past. My favorite part though is probably the way I read hero Han: a man who was attracted to the independence and agency of Li Feng. Though he wanted to take care of her and protect her, he also knew that she could take care of herself and he was attracted to her spirit. I just...I can't even fully describe how incredible I found their relationship to be.

The central conflict for them is that she is technically an outlaw with a soft touch for those in need while he is a thief catcher with a rigid sense of right and wrong that does not allow for leniency. They have several great conversations about their respective point of views and how they can move toward each other on the spectrum of what constitutes justice. In addition, I appreciated that they took a while to give into their physical urges-I like a slow burn.

As for the non-romance aspects, I ended up getting a little confused by the political conspiring going on. As Han and Li Feng discover, there is a salt smuggling ring going on (salt being a very valuable commodity at the time) in addition . But the last few chapters describing the new direction of Han's career with an official position in the government; there's another worker with a generous sense of right and wrong who was great to learn about.

Overall: Another great romance from Ms. Lin-definitely one to check out!