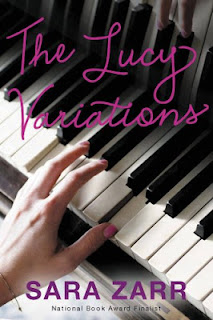 I haven't had the best of luck with Zarr books despite consistently finding her premises interesting (Once Was Lost was promising; How to Save a Life left me cold). Therefore I approached this new release with trepidation: yes, I loved the idea of dealing with music but how would I feel about the characters? As expected, I loved the music section but really struggled with main character Lucy and her trials and tribulations.

Probably my big problem with Lucy is one that's not even really her fault. As she often appears older than her sixteen years, is noted for her cosmopolitan behavior due to her unconventional career path, and as a reader who is a bit older than sixteen years, I wanted her to behave with a lot more maturity. I also wanted her crush, Will, her brother's older married piano teacher, to act with a lot more maturity as he skirted the boundary of appropriate friendship and flirtation far too much for my liking (and for his wife's liking). But all these factors contributed to me not really liking her. I tend to prefer books where I feel a connection with the main character-this is often because we have similar backgrounds (hey, I played piano too but nowhere near Lucy's level) but can be shaken when her actions differ from what I imagine my own would be and Lucy's did.

As for the other elements, another big part of the book is Lucy reclaiming her love of music. When she quit on stage before an important performance, her controlling grandfather said it meant that she quit piano forever. But while she felt burned out at that moment, it didn't mean she never wanted to play again. This also means standing up to family expectations of how she will live her life, which normally I can get behind but in this case since I didn't feel much for Lucy, I didn't want to invest that much in her growth.

My favorite part would definitely be in the beginning with her sweet little brother who now bears the family's expectations on his back. As the book progresses, he becomes more of a brat with his jealousy over Lucy and Will's relationship and presumably his own (unexplored) feelings about being expected to carry on the family's musical legacy.

Overall: Honestly I just feel like this was a book that left me cold-where I wanted to feel excitement and drama and anticipation, I didn't feel anything but ennui or frustration.