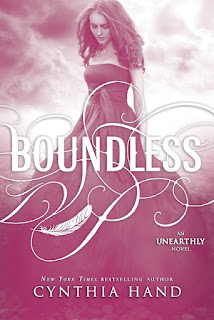 I was quite impressed with the first books in this series (Unearthly and Hallowed), finding them to be very well done examples of angel mythology. My biggest problem is that I just was never really on the Tucker train. I have seen loads of bloggers gush about him but I never got it. I could read the writing on the wall about Clara's feelings for him but I was never that excited about him otherwise. If you similarly aren't that impressed with Tucker, I expect you'll find this finale fairly lackluster. But if you're in the majority who loves Tucker, you'll probably be pretty happy.

The parts that didn't really involve Tucker were very good though especially the story of Clara's friend Angela whose story takes what was to me a surprising twist. Clara's brother Jeffrey also has some interesting twists; I really sympathized with her worries over his (poor) decision making. As for Christian, he has some difficult moments and some aggravating ones as well. I liked him less in this book than I have in the previous ones but he does have his heroic times.

One of my favorite parts is totally random though: see, my job involves some of the geography of California so I was pleased to see mention of some of the cities where I've done work. I felt so familiar with them and it made me smile.

I don't want to go too deep into the plot to avoid spoilers but know that while I think the plot mostly moved along at a good pace, there were some points where it dragged. The book does take place over about the course of a year so there is certainly time for adequate character development but I wanted a bit more action and a little less of everything else.

Overall: A strong enough conclusion to the Unearthly series-I think big fans will be pretty satisfied.

Cover: I love how we've had this same girl in a dress with different colors for all three covers although the purple of the first is still my favorite.