Confessions of an Almost Girlfriend 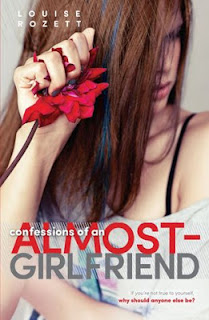 One of the biggest book revelations for me last year was reading Confessions of an Angry Girl. I was just blown away by its compulsive readability and the relatability of main character Rose. The ending was a bit abrupt, which makes sense when you realize there is a sequel covering Rose's sophomore year of high school and chronicled in this book.

The book opens in the summer and follows Rose through another crazy year at school: continuing to deal with the aftermath of her father's death, her anger with both parents and her older brother, drama at school, and of course her ongoing crush on Jamie Forta who is almost her boyfriend if not for a ton of extenuating circumstances.

As in the previous book, I appreciated Rose's vocabulary and the care she took to express herself to the best of her ability, which is far more eloquently than a lot of us could manage especially as teenagers. She does not always make the best decisions as she acknowledges but she knows right from wrong and she can stand up for right.

I was also touched by some of her self-conscious thoughts, in particular the following quote, which really spoke to me, even today when I am (thankfully) far away from my teenage years:

My big problem nowadays is thinking that I have much thicker voluminous hair (kind of like a Disney princess) when I have quite the opposite. It's often a shock to look at myself in the mirror and realize that I don't have nearly as much hair as I think I do and how that changes my perception of myself. Quotes like this and others really helped me click with Rose.

Of course I couldn't finish this review without mentioning the situation with Jamie. The first book ended with him standing her up and though she tries to shake her Jamie problem she just can't, which is well articulated in the book (there is some kissing). I personally don't much see the appeal of Jamie on his own but I fully understand the way he makes her feel.

Overall: A great sequel-that fans of the first book must pick up (if you haven't read the series, definitely start with the first before moving on to this second; it will make more sense and be more meaningful that way.)