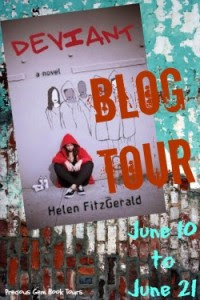 Today I am pleased to be a tour stop for Deviant by Helen FitzGerald as part of Precious Gem Book Tours. Check out the link for other tour stops, including interviews, guest posts, and a giveaway! 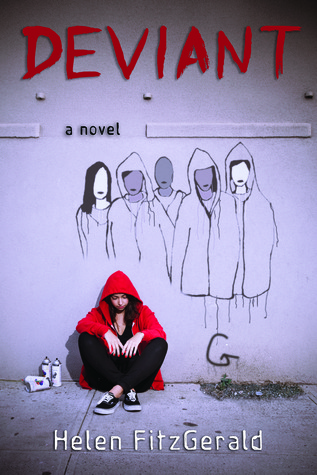 Source: Received an ARC from publisher in exchange for an honest review.


When 16-year-old Abigail's mother dies in Scotland--leaving a faded photo, a weirdly cryptic letter, and a one-way ticket to America--she feels nothing. Why should she? Her mother gave her away when she was a baby, leaving her to grow up on an anti-nuclear commune and then in ugly foster homes. But the letter is a surprise in more ways than one: Her father is living in California. What's more, Abigail discovers she has an eighteen-year-old sister, Becky. And the two are expecting Abigail to move in with them.

After struggling to overcome her natural suspicions of a note from beyond the grave (not to mention anything positive) Abigail grows close to her newfound sister. But then Becky is found dead, the accidental victim of an apparent drug overdose. As Abigail wrestles with her feelings and compiles a "Book of Remembrance" of her sister's short life, she uncovers a horrifying global plot aimed at controlling teen behavior: one that took her sister's and mother's lives, with vast implications.

When I found out about this tour, I was excited to participate because Deviant sounded like a very unique story. I've included the publisher's synopsis above because I think it does a great job at capturing the many interesting bits of this story: Abigail's upbringing in Scotland, her movement through foster homes, her newfound relatives, her sister's death, the plot aimed at controlling teen behavior. It sounded like a very far-reaching book and I loved that it was contemporary!

I'll admit that I had a bit of trouble getting in to this book as Abigail's harsh childhood was far bleaker than my own and I tend to click faster with characters who are like me. Once she arrives in America though, I found myself much more engaged. Abigail had to acclimate herself to a whole new culture AND to a previously unknown family-what a challenge! The pieces of the puzzle come at you slowly before quickly building up to a dark conspiracy with Abigail fleeing for her life and narrowly escaping death. I mean, it is tense and the last chapters just fly by, proving that all the buildup was worth it.

For favorite character, I would have to pick sister Becky although we don't get to spend much time with her before her "overdose." She's a spark and the way her courage and work inspires Abigail was wonderful to see. I also liked their stepmother Melanie who could probably best be described as a Stepford Wife. Her robotic behavior was bizarre but gripping all the same. As I said, Abigail had a much harder life than me turning her somewhat dark and withdrawn, which is understandable although it made me feel like it was hard to connect with her (the use of third person narrative rather than first person like many other YA titles possibly contributed to this as well) but by the end, I was thoroughly absorbed in her journey.

Sadly this book does not currently seem to be part of a series although the conclusion seems ripe for one. I wonder if the author plans to continue; I know I would be interested in coming along for the ride.