If He Had Been With Me 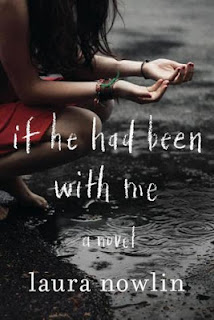 If He Had Been With Me by Laura Nowlin
3/5 stars
Sourcebooks Fire, 2013
328 pages
YA Contemporary

There may be *minor* spoilers in this review.

From what I recall, this book grabbed my attention with the fact that its genre is contemporary and looked to be on the sadder side with the protagonist mourning the loss of her best friend after his tragic death (this is laid out in the first few chapters so I don't want any cries of spoiler!) I tend to prefer humorous books but I also want to push myself out of my comfort zone so I decided to give this a try. My impression of this book being sad was accurate-I mean, even the title and cover work together to advertise that.

I expected the book to look briefly at the pre-accident days of this epic friendship, building to the accident, and then showing how the main character Autumn dealt with the loss of Finn who she has realized she was in love with. To my surprise though the book covers their four years of high school where their history and the fact that they are neighbors whose mothers are best friends keeps them in the same orbit but whose cliques feud and prevent anything more. Indeed Autumn and Finny (I loved that she and his mother were basically the only ones who called him that) spend most of the book dating different people before finally admitting their feelings.

Another thing I didn't expect was for the writing to be quite poetical at times. There were some beautiful passages, perfect as Autumn wants to be a writer. I liked a lot of the side characters but the main focus is definitely Autumn and Finny with the book weighing on her side as the narrator while he remained a bit of a cipher.

Unfortunately I had two big problems with this book that ultimately led to my middling rating of 3. The first is the abrupt ending. Finn dies and then there are a few pages after but far more time was spent on the buildup of their history. It felt unevenly weighted and concluded so fast. I also thought that the book dragged a bit as it rushed to cover four years (plus flashbacks to childhood). My biggest problem with this book though is the two mentions of unprotected teenage sex that lead to pregnancies. I like how there are consequences and yet I feel like it was portrayed as romantic to become a teenage mother when it's anything but.

Content: Sexual references and a lot of underage drinking-the language is pretty clean though from what I remember.

Other Opinions:
Imaginary Reads
Into the Hall of Books