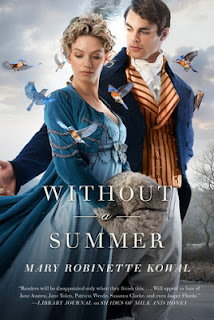 This is the third book in the Glamourist Histories series following the adventures of Sir and Lady Vincent in Shades of Milk and Honey and Glamour in Glass during Regency times. Although the first book drew heavily on the works of Jane Austen, the second moved away and this third book continues the trend expanding on the historical and magical foundations of this world.

The year is 1816 and it seems like the winter will never end with crops failing and increasing unemployment with returning soldiers from the Napoleonic wars.  A convenient target is the coldmongers who, in small doses can manipulate glamour to keep things cold; the general public considers them the reason between the freezing and the situation gets tense. On a more personal level, Jane and her husband have a commission in London and they take this opportunity to bring Jane's sister Melody along so she can potentially acquire a husband. But her number one choice seems very unsuitable especially as he may be involved with something very shady.

My favorite aspect of this book is actually one I didn't mention above: Sir Vincent has been estranged from his family ever since he pursued glamour as a profession but the possibility of reconciliation is dangled, introducing many new characters including his cold and cruel father. I also really liked the historical elements-I didn't even know about this cold summer until I read this book.

The part I didn't really like was the romantic subplot-I didn't think much of Melody's suitor, which coincides with Jane's assessment of his character. When the main character is so anti-someone, it is hard to persevere in liking him. Luckily Jane and Vincent have some really cute moments as they fight for their marriage despite many challenges. They are starting to know each other so well and have great banter.

Overall: Fun magical world incorporating lesser-known historical facts (there's a fun discussion guide at the end to peruse) and ever deepening its characterization.