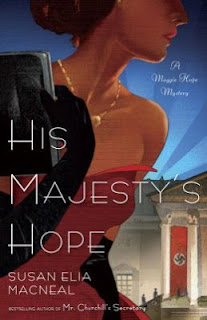 After enjoying Mr. Churchill's Secretary and being completely blown away by Princess Elizabeth's Spy, of course I knew I would be reading the third book in what has rapidly become one of my favorite mystery series. This book promised more adventure and deepening threats but ultimately was less satisfying to me than the previous outings although I'm not entirely sure why.

The premise is very promising as Maggie is finally getting an opportunity to flex her espionage muscle, becoming the first woman to be dropped in the field on a mission to Berlin, Germany. This expands when Maggie picks up some clues and expands her directives even further to fight Nazism. Meanwhile her own personal life implodes with family and romantic relationship troubles.

Maggie is, as always, intrepid and very daring; not bloodthirsty but committed to seeing through her cause. She faces some tough moments in this book and handles them with aplomb. The previous books have been building toward certain events and those payoff here while also setting up further events for the next book.

I think part of the reason for my enjoying this book less is due to the more somber tone because this book highlights Operation Compassionate Death aka the Nazi program to euthanize thousands of mentally ill and physically deformed children, those who were deemed unworthy of being part of the pure master race. This hangs over the entire book and Maggie part of a group who gathers evidence to expose these disgusting acts.  I guess I felt like the first two books were a little cozier and I preferred that style but I should have known that a story set during World War II will have to address this at some point. Of course, since this book is set in Germany, we're also seeing the persecution of Jews in particular the forced deportation.

A subplot I did love concerns Maggie's friend David who is gay and may have found the one to his parents' dismay. Though it does not take up much page-time, I enjoyed whenever the book shifted back to him. Something I did not enjoy was Maggie's love life, which ends very unsettled but which I will not discuss for fear of spoilers. Let's just say that I was a big fan of John in book one.

Overall: Mix of tones is a bit confusing: we have the darkness of euthanasia and Nazi evil balanced against some lighter scenes and mixed with very addictive writing that led me to finish this much faster than I had anticipated. If you've liked the previous books in the series, you'll probably want to continue.

Cover: Love this cover-the glamor of her dress plus the menacing Nazi swastika in the faint background are just excellent and so appealing to me.