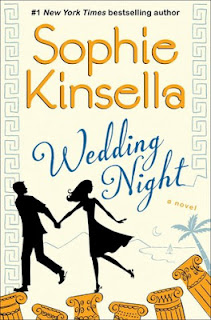 Although I don't much like the Shopaholic series, I have loved most of Kinsella's standalones so I was excited to pick this one up. Further adding to that was the knowledge that it featured sisters. Unfortunately my sister put a bit of a damper on my enthusiasm when she said she was not impressed with this book but I think she was being too hard on it as I had a lot of fun with it.

I think a big part of your enjoyment will stem from whether or not you can tolerate someone meddling in the affairs of someone else. This often irks me but when I read about a sister thinking she knows what is best for her five years younger sister, I'm pretty sympathetic (guess how much younger my sister is than me?) And in this case, Fliss has some good reasons for being concerned for Lottie. After every breakup, Lottie has flung herself into some horrendous decisions but this latest is probably her worst: deciding to marry her gap year boyfriend who she hasn't seen in 15 years. Fliss interferes by attempting to prevent them from consummating their marriage so that they can get an annulment when they inevitably realize they are wrong for each other thereby avoiding the trauma of divorce which Fliss is presently undergoing. Needless to say some ludicrously hilarious things occur.

My personal favorite moment is when Lottie and her new husband are on their honeymoon, attempting to cram for a Couples Quiz and he is incapable of answering such simple questions as "What is her favorite alcoholic drink?" However he can answer as if they were Dirk and Sally, the lead characters on their favorite TV show. When they decide to play as Dirk and Sally, the tide changes and they can answer any question perfectly. I have a soft spot for the Newlywed Game and this version of it made me so happy to imagine.

A close second is how Lottie's ex-boyfriend Richard (the one who sends her spiraling into the arms of the old boyfriend) reappears in the story. He realizes he was wrong to have let Lottie go and is planning to fight for her. It's quite romantic although I'm not going to spoil any of the details (does he win Lottie back? No spoilers here!)

Overall: Although this is not my favorite Kinsella book, I think fans will find plenty to love here. Suspension of disbelief has often been necessary for these kinds of books and this one is no exception. It's perfect for a light summery weekend beach read!