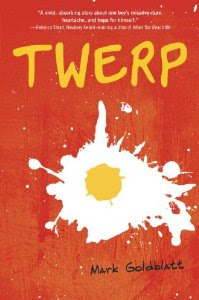 This book is technically set in the 1960s but for the most part it feels very contemporary, lacking, for example, talk about the civil rights movement but also lacking mention of computers and cell phones. Apparently it is based on the author's own childhood and it feels like it comes from a very real place.

The format of the novel is that the protagonist, Julian, is keeping a journal for his teacher after an undisclosed bullying incident (which is eventually revealed to us at the end). Along the way, we gain insight into his friendships, first romance, and a burgeoning talent for writing.

For me, the real standout of this book is the writing which felt sophisticated but not in an off-putting way. I imagine that very few sixth-graders write as well as Julian but just because they're not able to put it all in words, doesn't mean they're not thinking these things. I feel like this book could be very popular both with its target audience as well as crossover to an older audience due to the writing style. There's a great balance between comedy and drama and I loved how friendship and loyalty are at the core of Julian's life even when they lead him astray.

Overall, this is a title that I would definitely recommend to young and older readers alike who enjoy contemporary/realistic stories. This is also a great addition to the literature about bullying, being a compelling witness to its wrongness without veering into preachy territory.