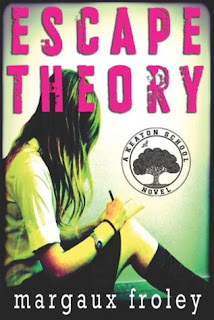 I read a couple of reviews of this that prompted me to request this book, emphasizing the fact that it has a mystery and is set at a boarding school (score!) I adore reading about boarding schools although I am grateful that I did not attend one; college was enough.

The boarding school featured here is entering a tragic year when one of its brightest students, Jason Hutchins or Hutch, is discovered dead from an overdose of OxyContin. This suicide casts a pall over everyone especially Hutch's best friend Matt, his girlfriend Isla, and Devon, who shared an unforgettable night with Hutch their freshman year and is acting as a peer counselor to the grieving. These sessions and Devon's own exploring lead her to the conclusion that Hutch did not kill himself but was instead murdered and she devotes all her time to figuring out just who might have done it.

Devon's obsession with Hutch (yes, obsession is the word I'd use) is a bit weird. They had one perfect night making Nutter-Butter pancakes and she still idealizes him based on that experience. But they barely talked in-between and she has largely hung on the outskirts of the school's social circle while he was very much at its center. I understand how she would cling to those fond memories but I also worried about her. On the other hand, I admired her efforts as peer counselor which were hindered by an apathetic student population as well as an interfering administration. She is also very determined as can be seen by the way she doggedly tracks down Hutch's last moments.

Honestly though the mystery was a little less engaging. I ended up having a bit of trouble following all the characters and their motivations. I had no idea who did it and the ultimate answer is so heartbreaking. Her investigation also sheds light on a prescription drug ring that involved Hutch during his life as well as almost every student at the school. This seemed a little clumsily integrated but it was acceptable.

Overall: A fun mystery, perfect for lovers of boarding school stories (and I know there are quite a few of you out there!)