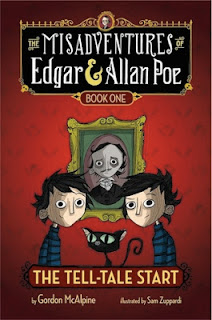 One of my favorite classic authors is Edgar Allan Poe so I always perk up when I see contemporary novels incorporating him in some way. The twist for this book is that identical twins Edgar and Allan Poe are the multiple great-grandnephews of Poe may be one person in two bodies and the scientific implications of this have led to a mad scientist spying on them for years.

I think that premise sounds fairly bonkers and settled back for a zany ride, which is exactly what I got. My favorite part was definitely the peek into the life after death where Edgar Allan Poe watches over his relatives while also toiling under the direction of a very bossy William Shakespeare-so humorous!

The boys are brilliant geniuses and have an excess of time and energy, leading to them getting up to a lot of stuff. Mainly in this book, they travel cross-country to get their cat and end up confronting the scientist. I didn't feel like there was a whole lot to the plot given the book's relative shortness but that may make it all the more appealing to its target audience and perhaps serve as a push to reluctant readers.

This is the first in a series and thus it concludes with a very open ending that leaves room for many more adventures in the offing for Edgar and Allan.

Overall: I would say that this reminded me a lot of Lemony Snicket and I think his fans will enjoy this book as well.

Cover: Very spot-on although the eyes of the boys aren't as identical as I would have expected. Love seeing the cat, Roderick Usher :)