Queens of All the Earth 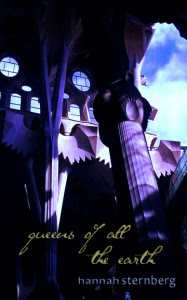 Queens of All the Earth by Hannah Sternberg
Bancroft Press, 2011
159 pages
YA; Contemporary
3/5 stars

Source: Received an e-ARC through Netgalley in exchange for an honest review.

I read the first two chapters of this and then stopped because I was not feeling it at all. The next day I picked it up again and moved slowly through it. It's inspired by A Room with a View by E.M. Forster and I've seen a movie adaptation of it so I enjoyed catching the references. Furthermore the writing was absolutely gorgeous, with long, luxurious scenes filling me up with details.

However the characters were what lost me. Olivia and Miranda are sisters (!) embarking on a trip to Barcelona after Olivia suffers a nervous breakdown instead of attending Cornell. They are separated by a big age difference and it is eventually revealed by Olivia feeling somewhat abandoned by Miranda.  But neither is very likable. They both scorn the Browns for...well, no reason that I could see. Snap judgments are made and stubbornly stuck to. Meanwhile Mr. Brown and Greg, who seemed like perfectly nice people and much better potential protagonists, wander in and out of the story.

Additionally while the writing was beautiful, the plot meandered with seemingly no specific end in mind. As I've never read A Room with a View, I can't compare if that book also had such a slowness of plot. But I didn't like it. However it is different from the majority of YA which can sometimes suffer from an action overload and/or poor writing.

Overall: A well-written coming-of-age story; prepare to marinate in the atmosphere as you slowly move through the book.