A Blue So Dark 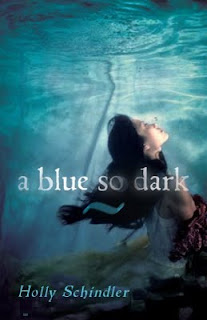 I wasn't sure what to expect with this book and I wasn't very impressed in the beginning with much more swearing than I was comfortable with and a boy who's presented as hot when he sounds gross and in need of a haircut. But as the book progressed, I was drawn in to this dark and twisty story.

See Aura is the sole caregiver for her schizophrenic mother as her father has abandoned them for a new "perfect" family. Aura is slowly drowning in the burden of caring for her mother alone, school and friend troubles, and her growing fears that creativity will lead her down the same path as her mother.  I really fell in love with the writing as Aura's mother's schizophrenia gets worst and Aura almost completely withdraws from the rest of the world to care for her. I was caught up and involved and it made me feel so much. I applauded Aura when she finally found the strength to admit that she couldn't care for her mother alone.  I also applauded when Aura's grandmother steps in; the grandmother and mother were estranged but the grandmother is pretty awesome and the later scenes with her were fist-pump worthy!

I also enjoyed reading about her fears that her interest in art and genetics will ensure that she is schizophrenic. Any one who suggests that she has an artistic talent is viewed by Aura with skepticism and suspicion. She will protect her mother as best as she can but she will try to keep herself from following the same path.

I did take half a star off for the cursing, which I felt was largely unnecessary, for the lame romance, and for the description of Aura and many of the students as a "gypsy"-what?! I didn't really understand it and those were among my least favorite parts.

I don't think this is really my usual kind of novel as it's much more literary and perhaps a little less plot-driven; regardless, I really enjoyed it and I highly recommend it.