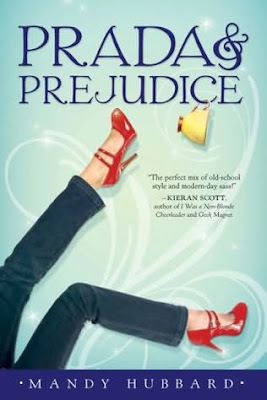 I was really excited about this book but in the end I felt way too old for the characters and misled by the title. Main character Callie is young, self-conscious, and has been made an outcast by the popular crowd. Now I think you're supposed to feel sorry for Callie because she only has one friend. But maybe she only has one friend because she gossips about people behind their backs-I certainly wouldn't want to be her friend! Then she decides to buy an expensive pair of Prada shoes in order to get in good with the in-crowd while on a school trip to London.

Then seconds after walking out the store in the shoes, she trips and wakes up in a forest. Turns out she has traveled back to 1815...into a world of lords and ladies, servants, and corsets.  Now I'm willing to accept the time travel but there were so many other things that I felt Callie ought to have known. For example, dukes are referred to as "Your Grace." Has she not seen Cinderella? Or read any historical fiction? She doesn't understand any etiquette (of course this is a girl who gossips behind people's back so...) and she makes so many gaffes that had me banging my head against the wall. Now admittedly I am a long-time reader of Regency romance and historical fiction, which has certainly helped with my understanding of behavior and decorum for the times. But Callie seemed to have no understanding of how things change over time and the fact that she may have to moderate her behavior.

Did I applaud her stands for woman's equality? Yes. Did I love the scientific facts she dropped on the unsuspecting crowd? Yes. Did I like how she unconditionally supported her newfound friend? Yes. But I kept thinking she was a moron and needless to say that really detracted from the story.

One other annoyance was the title which hints at a much stronger resemblance to Pride and Prejudice than I received. The setting is similar although I think Austen's work is supposed to be set a little earlier. Another similarity is her meeting with an incredibly arrogant guy who it turns out is very upstanding and honorable, a la Darcy.  Her first impression of him was wrong.  But while I liked this guy Alex, Callie is no Lizzie.  Happily she has some character growth but I don't think she had enough sense smacked into her by her time travel.

Overall: May be a better fit for a middle-grade reader as this is very clean and there are some wacky hijinks.