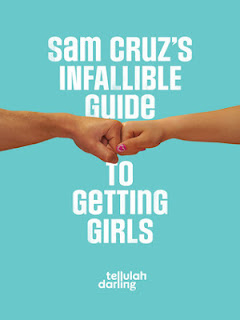 Synopsis: After getting her heart broken, Ally decides to be more like a guy, more like her best friend Sam Cruz and pursue her physical gratification without all those emotions getting in the way. For his part, Sam is thrilled to groom Ally, striking a blow for guys everywhere. But when the two get involved, will it ruin the best relationship in his life?

I am of two minds about this book. On the one hand, it was fast-moving and funny with a satisfying ending. The dialogue crackled and I was never bored. I especially adored the two-narrator setup although I definitely preferred Ally's sensitive intellectual narrations to some of Sam's more boorish comments.

On the other hand, I was uncomfortable with the youth of the characters. They're seniors in high school and I know that it's not really that young of an age to be sexually active. But as I get older, I guess I keep wanting to infantilize those youngins, as I think of them. It would have been so much better for me if it was just a few months later and they had been in college. I just expect college students to be more emotionally prepared as well as overall prepared for any negative consequences. This is very much a personal preference when it comes to books.

Additionally as I hinted at above, I really liked Ally but wasn't as sold on Sam due to his promiscuous lifestyle. He seems to have learned it through observation of his widowed dad but I think Ally could do better. It was definitely helped by the fact that Sam got to share his thoughts, with his changing views on his father playing a pivotal role in his journey, but I still think Sam is dating way out of his league.