The Boy on the Bridge 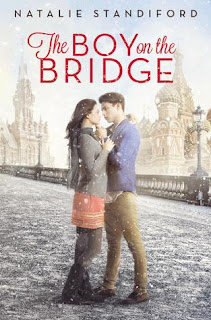 The Boy on the Bridge by Natalie Standiford
3/5 stars
Scholastic Press, 2013
248 pages
YA Historical

I loved the idea behind this book which follows a college student studying abroad in the USSR in 1982. I studied abroad in Singapore (actually the place where I discovered book blogs and started mine) so have fond memories of the experience though mine was obviously vastly different. For one thing, almost everyone there spoke English so I didn't struggle as much with language barriers as Laura did when she was plopped into Russian culture. For another thing, no one wanted to marry me in order to get a green card to go to America...as I think on it, that's probably the biggest difference.

In case you didn't know, living in Leningrad (St. Petersburg) is living under a totalitarian regime where everyone is potentially spying on you, your apartment might be tapped, and you can be hauled in by the police for any reason they want. Additionally everything is scarce to be found unless you are among a small cohort of Westerners with money to spend in exclusive shops and a passport to get you out of there again. Consequently you can be very popular as happens with Laura who is romanced by the charming Aloysha, an artist who genuinely cares for her and is not at all interested in using her nationality to get him out of there...or is he?

One of the big questions in the book revolves around Aloysha's intentions. Quite frankly, I was always suspicious of him and believed that while he could care for Laura, his caring for himself was preeminent. The book treats his motivations as being more murky to my frustration. I could handle it being either way but the ambiguity was not satisfying to me.

His friends Olga and Roma further complicate his story with their differing perspectives on life in the USSR. Olga is possibly in love with Aloysha herself though married to Roma and her words probably should not be taken seriously. Yet she was also incredibly charismatic and exciting to read about. Saying that, I honestly ended up being more interested in Laura's roommates: fellow American Karen who had a good head on her shoulder and Ninel, a Ukrainian who seems to swallow the USSR philosophy wholesale. There are only tantalizing glimpses of these young women as we hone in on a Laura increasingly obsessed with Aloysha, treating her education casually, and who can't even bring herself to care when she fails.

Though I guess this book is technically New Adult because it follows someone who is nineteen, it did not read that mature to me. That is probably due to Laura's naivety; she seems to be a rather sheltered nineteen who heedlessly ignores pretty much everyone's warning about the possibility of being duped. Due to some content, I think this may be better for slightly older readers but it does not feature the steam I associate with NA nor do I feel like it is entirely distinct from the other YA I regularly read.

Overall: A rather dull heroine and too much ambiguity cloud my impression of this book; though I am excited about the unique setting, it didn't manage to click with me. Perhaps readers who are more into Russian culture will enjoy it.