ARC Review: Not a Drop to Drink 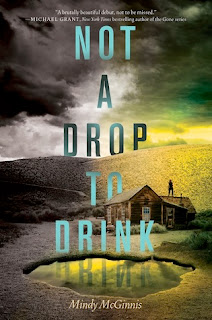 Not a Drop to Drink by Mindy McGinnis
3.5/5 stars
Katherine Tegen Books, 2013
309 pages
YA Dystopia
Scheduled to release September 24

I wasn't very sure about this one because I do tend to like happier books and I've been a bit burned out on dystopias. But I find water scarcity scarily plausible and since I was able to get a copy shipped directly to me, I figured I'd take a shot.

The summary, to me, makes this sound like a day to day survival story for one young Lynn. In some ways this is true; Lynn has a pond and will kill to protect it for herself. But in other ways, the book has a lot bigger focus, looking more at community as Lynn meets new people and lets her guard down so they can surprise her. I thought the book would be more in her head when it's actually told in third person following several characters as they band together. Since I really liked the ways Lynn bonded, I was happy with this unexpected turn.

Sadly though I just never quite clicked with the book despite finding it a very easy read (completed in just a few short hours). I felt moments of dread as strangers threatened Lynn's water and I felt moments of compassion when she reached out but it was not as intense as I expected. I suspect it might be at least partially due to the narration. Thanks to the prevalence of first person in YA, I do tend to find myself partial to it. The way the plot played out was also fairly predictable with only one part (SPOILER: Eli's death) managing to surprise me. My eyebrows raised at that part because I figured after that character did so much, something else would occur.

I did appreciate that this is a standalone and that the epilogue brings some closure and even manages a bit of optimism in this bleak not so distant future. I liked all of the characters well enough. I just don't have very passionate feelings about this book. If you really like dystopias, definitely check it out. If you don't really want romance, check it out. If you want to read a self-contained story that doesn't have a cliffhanger ending, check it out. I feel like the water scarcity is a different angle so that's another reason to check it out.