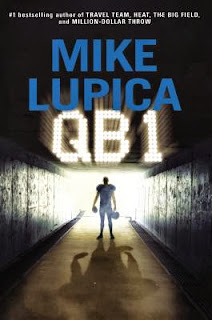 I received this unsolicited from the publisher and decided to give it a chance after reading the back cover comparing its "glamour and emotion(s)" to that of the amazing Friday Night Lights. Well that's a pretty big standard so I was intrigued to see if the book could in fact live up to that.

To start with, the MC's name is Jacob Cullen. Um, what? I don't think the target audience for this book (probably middle-grade to young adult males) will have the same reaction as me but us bloggers might have some feelings about this choice :) The story itself is pretty straightforward covering an entire football season as they pursue glory. An obsession with football is well-documented with radio stations eagerly following the competition to be first-string quarterback and with restaurants offering 50% off after a win-everyone is heavily invested in these boys and their successes (or not) on the gridiron. And that's almost all there is. Plays are described in detail, really too much detail for me but I'd love to see what some football lovers think of it.

Personally I would have liked to known more about Jake. Apparently he pulls straight A's but we never see him in class or really doing anything but playing football, feeling things about his relationship with his dad, and angsting over a girl. Jake is a freshman with very clean thoughts about said girl, which is why I estimate that this might be appropriate for a middle-grade audience. I'm used to sport books having more language and sexual thoughts as they target older readers-this one is quite clean though.

Overall: A cute enough read but I'm not really the audience for it; I wanted more character depth and less football plays.

Other Opinions:
The Reading Date