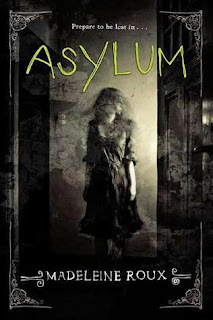 I am a complete sucker for books with historical photos included so upon discovering that Asylum was one of those books, I was eager to check it out. As an ARC, it was missing a few pictures but for the most part they were present and really added to the creepy vibe.

The whole premise is pretty dark and creepy though to be honest. Dan is thrilled to be spending his summer attending a college prep course, to be surrounded by other people with a healthy intellectual curiosity instead of being derided for his smarts. Almost instantly he hits it off with two people, one being the prettiest girl he's seen. That night they decide to explore the office of their dorm, formerly a mental asylum for the seriously deranged. This triggers many unpleasant occurrences and leads them to fear for their lives as they attempt to unravel the dark history of this asylum and end up fearing for their own mental health.

See-doesn't that premise promise some thrills? And while I'm admittedly a wimp, I thought this book was very atmospheric and successful in delivering on that. I had no idea what was going on as ghosts seem to threaten their lives...or is it all in Dan's imagination given his own fragile mental state? I had my suspicions and the fast pace of the book and easy writing style quickly confirmed or shot them down.

I don't think this book could be characterized as being heavy on drawing the characters' personality being more interested in spooky going-ons so if you're a reader who likes vivid characters whose souls you get to know inside out, this probably isn't the book for you. If you like a breakneck pace though, you can slip easily into this book for a few hours, coming out at the end with your neck tingling. Could be a fun read for October/Halloween!

Other Opinions:
Ems Reviews Books
Good Books and Good Wine
Moirae (the fates) book reviews
Once Upon a Twilight