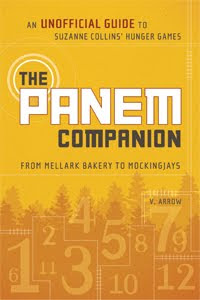 For whatever reason, I've been super into reading books about The Hunger Games. Earlier this year, I reviewed The Girl Who Was On Fire and loved it so I was thrilled to check out another release from the same publisher looking at some different aspects of this beloved trilogy.

The weird thing for me is how interested I've been in reading unofficial guides and analysis about the books. I've been a huge Harry Potter fan, Star Wars, Lord of the Rings, and others but I didn't necessarily want to read anything other than the fictional texts, whether official or unofficial. Yet something about Collins' text really drives me to think about it more academically and makes me love it even more. I suspect that has something to do with the fact that instead of being fantasy, it is dystopia and as Arrow tracks in this book, events could occur that lead to similar circumstances to create the world of Panem. It's not likely. Also because of that closeness to our real-life, I feel more easily able to see the similarities and ways of approaching analyzing them especially in Collins' presentation of war and reality television, the juxtaposition of which Collins has admitted was a huge jumping off point for the series.

Besides looking at some of the most important characters, settings and themes of the trilogy, this book also contains a lexicon looking at the background behind the names of (I believe) all the named characters. Though these analyses are purely guesswork, they do provide interesting insight into some of the thoughts that may have guided Collins when naming as well as providing foreshadowing on their eventual fates to those who know.

The best part of this book though is that it is pushing me to reread the trilogy, something I haven't done since first reading it in 2010. I think that will be a 2013 goal and I can't wait!