Not Exactly a Love Story 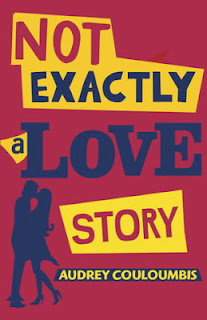 As seems to happen so often to me of late, I am of two minds about this book, one very positive, the other latching onto one element that really drags down the rating of the book because it just strikes me the wrong way. It's a huge bummer because of course I want to love every book I read.

Let's start with the good, which is that this is a historical. It is so weird to classify this it that way but it is set in 1977 while being written today so that is what it technically is (sidenote: props to Coulombis for not making any characters obsessed with Star Wars because I would have been unable to resist that temptation). But it feels very contemporary with its focus on high school, love, and family. I especially loved the family plot, which has Vinnie's parents getting divorced, his mother almost immediately remarried, and Vinnie moving across the city, forced to attend a new school and getting bullied. He's also navigating crushes including the beautiful popular Patsy who is dating Vinnie's bully.  All of these parts were just fine with a good balance struck between everything.

What is the bad then? Well, Vinnie steals the phone number to the private line of Patsy, who lives next door to him. He decides to call her at midnight and his opening line is...shall we say...not smooth. He sounds like a pervert and he continues to call her, trying to develop a real relationship. Along the way he thinks about how she could've been nicer and more understanding but it's not like she owes him anything. It's also really creepy that she learns he goes to her school but he refuses to divulge his name or his private number or anything about himself. Vinnie can learn as much about Patsy as he wants but she is stymied in learning the most basic facts about him-he has all the power in the relationship and I was really uncomfortable because Vinnie is our hero. I hope he's not going to be used as a role model for similarly awkward boys. And because it's 1977, all Patsy can do is find out from the operator that the number is local-there are no other ways to trace.

Overall: As I said, this one negative element really gave me pause and dragged down the rating of the book. It's my one big hesitation when thinking about whether or not to recommend it to others so I guess I'd say the writing is good but this one plot point was a big sticking point for me.