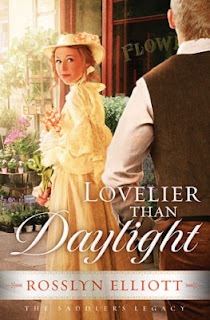 Source: Received a copy through Booksneeze in exchange for an honest review.

Book 3 in this trilogy picks up in 1875 with the niece of book 1's couple. Susanna arrives to attend college at Otterbein only to discover her sister's kids have been dropped off at orphanages and her sister has disappeared. Additionally a man is attempting to open a tavern in the dry town much to the ire of the temperance movement there.

I loved that alcohol and temperance played such a big role here. I did think that it leaned a little heavily on the extreme pro-temperance side (since that is Susanna's belief and she is the main character); keep in mind, that aligns with my own beliefs and even I thought it was a little extreme. But we also have a strong voice arguing for the allowance of alcohol in the person of Johann Giere, son of a brewer who is an aspiring journalist and whose feelings for Susanna put them in constant contact. There are other voices on both sides but those are the most prominent. Another historical plot aspect was the power of journalism to effect social change. Although this isn't a major thread, newspaper stories provide important documentation about the battle over alcohol and other abuses. We're in a golden period of journalism here!

Johann is a good man and their romance was so sweet. I've read the previous books and this was definitely my favorite romance. I loved the short courtship and the way that sharing their first names was such an intimate act. Although I'm a modern woman, I have idealized some of the old-fashioned mores and this romance was a great example of that.  They both placed such value and caution on pursuing this relationship in contrast to some more casual treatments of relationships in some YA novels.

However what really got me and lifted up this book was near the end when Susanna is challenged in her faith. She realizes she was acting out of righteousness rather than with the love and mercy of Jesus. The example of her aunt Ann and uncle Will was pivotal in her recognition of this fact as were interactions with her sister and Johann. It moved me to tears and caused me to reflect-a great combination.

Overall: If you like these categories (Christian historical), I would highly recommend this. I hope if you've read the other books, you also enjoy this one. This can be read as a standalone but I think the rich historical background of the others would add to your reading experience.

Cover: I really like this cover-I think the pop of yellow makes this my favorite cover of the trilogy.