The Lady Most Willing 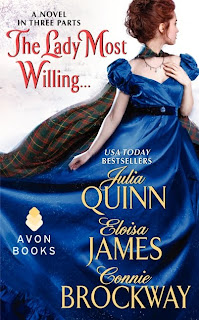 Potential spoilers: the set-up for this book is that there are several eligible young people and you don't quite know who will end up with who; however I will be talking about that. I don't think it should be a big deal but fair warning to you.

I'm a total Quinn fan girl as I believe I've said on multiple occasions. But for some reason I've had a prejudice against Scottish romance stories. Basically I only seek out Regency London romances but when other Scottish stories have come my way, I have turned up my nose. I guess I have absorbed some of the characters' prejudices as there Scottish lords seem to be considered on a lower level than English. So the setting did briefly give me pause although that was soon assuaged.

Also giving me pause was the framing for these three stories which is that Lord Ferguson has two nephews and he is tired of waiting for them to get married. So he and his clansmen kidnap prospective heiress brides (and accidentally a duke) from a nearby house-party and let themselves get snowed in while magic happens. On the one hand, I'm super annoyed for these girls at their fate of being abducted but on the other hand, it strongly reminds me of Seven Brides for Seven Brothers, an old musical I adore so I resolved to push past that to check out the stories.

First up is the Duke of Bretton with Catriona Burns, accidentally kidnapped as she is penniless. Nonetheless the two find themselves drawn to each other and quickly fall. As you might expect, there is a lot of wit and humor in this Quinn selection.

Second was probably my favorite coupling with Fiona Chisolm and the laird's nephew the Earl of Oakley. She is ruined in the eyes of society after her fiance died falling off the ivy on her tower while the earl was thrown over my his fiancee in favor of her dance-master. This is a second chance to do things right for the pair and they were so adorable. The earl was so upright and kind of a stick in the mud but I tend to prefer that kind of hero to the charming one who gets away with all sorts of wrong-doings.

The last couple was Cecily and Robin, the laird's other nephew. She has always been waiting for true love and as soon as they meet, she knows she's found it. Meanwhile Robin thinks he is insufficient due to his upbringing and his poverty while she is an heiress. Cecily has to be the aggressive one in this relationship in order to bring them to the altar.

There is also a fourth young lady, Fiona's half-sister Marilla who is shameless in her attempts to snag a lord for her husband. As each man falls for his partner, she simply moves on to the next guy. She was incredibly annoying, both to the characters within the book as well as to me. But she manages to get her own happily ever after so all's well that ends well!

Since these are short stories, the romances move incredibly fast (most over just one day before the snow thaws enough after maybe three/four days) and aren't as satisfying as a full-length story can be. However it did a great job evoking the cold and making me smile in time for Christmas! If you like these authors and/or Regency romance tropes, I think this will work for you.