The Passion of the Purple Plumeria 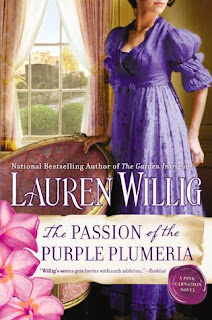 Just a quick review today as I check in with Eloise and her historical research for the tenth book in the Pink Carnation series. Though I have not reviewed every book in the series for my blog (see the Lauren Willig tag for those I have reviewed), I have read every book and found myself especially enjoying the most recent ones. Sixth book The Betrayal of the Blood Lily was an especial favorite and I knew this book featured characters related to ones in that book though as they took place roughly concurrently, there was not an overlap in appearance.

Our main characters are Miss Gwen Meadows who has served as a second in command to the Pink Carnation but who I don't really remember. As an older unmarried woman, she serves as a chaperone and has cultivated a brash domineering persona that helps her to organize everything while covering up some of the softer parts of herself that have been heart. Her unlikely hero is Colonel William Reid, father to the hero of Blood Lily, whose unconventional past has led him on a crazy road to Miss Meadows.

The adventure in this book keeps them in England while they track down Gwen's charge's younger sister and Reid's daughter, both of whom have disappeared possibly under nefarious (French-related) circumstances as the English still war with Napoleon and the French. They go on a merry and slightly danger-filled journey to track the pair down. I enjoyed the banter between the couple but was never fully engaged with the plot.

Meanwhile in the present day Eloise and Colin are rapidly facing her return to America and must decide how their relationship will progress. They are also still in conflict with Colin's cousin/stepfather Jeremy and his greed. I am very invested in the Eloise/Colin relationship by now and like how this appears to be going. This was actually an instance where I wanted to focus on their story even more than the historical bits.

An added delight in my edition were interviews at the end between Miss Gwen and the author-a meta treat!

Overall: If you've read the previous books, of course you're going to want to continue! If you haven't started yet, I'd advise you to go back to the beginning so you can dive in with fresh knowledge about the Pink Carnation.