The Dead and Buried 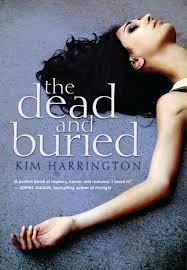 The Dead and Buried by Kim Harrington
4/5 stars
Point, 2013
295 pages
YA Mystery Paranormal

I became interested in this after reading a couple of reviews (see below for links) touching on its mystery aspect. While I mostly read YA, when I venture out to adult books, it is usually for either romance or mystery. I just feel like YA doesn't have many good mysteries. I also adore ghost stories although the ones I read tend to be love stories. The malevolent ghost here is an anomaly in my reading habits.

In this story Jade and her family have recently moved to a new house with her younger brother mentioning that he sees a girl, something Jade brushes off as she prepares for school. In addition to the usual struggles a new kid faces, Jade is soon the object of gossip because she lives in the murder house. Yes, the girl her younger brother sees is a ghost, the former most popular girl at school, Kayla, was murdered in her own home and she will torment Jade's family unless Jade finds her murderer.

As I've mentioned before on the blog, I am not good at solving mysteries and this was no exception. I fingered the same person that Jade suspects but it turns out to be someone else. The murderer's reason makes perfect sense but I'm just not good at picking out who has something to gain or who has the opportunity until the characters have already figured it out for themselves. Anyway...

One of my favorite parts of Jade's character was her interest in gemstones, inherited from her mother. Every day she picks out a new piece of jewelry to complement her mood and to shed light on what's going to happen. Another part of Jade's personality is her deep love for her much younger brother. He's technically her half-brother, sharing a father, but she makes no distinction for him; I only bring it up because it does play a role in the subplot. I love sister-sister stories but lately I've read a few really cute sister-brother sisters including this one and I think I am willing to extend my love to all focuses on sibling relationships.

I feel like such a cranky reviewer about this one point. The students study Rebecca and the story has real-life parallels to Jade's feelings of insecurity in the face of Kayla's supreme popularity.  On the one hand, I wish that had been emphasized more. But if it had, I might have found it heavy-handed and like the author didn't trust me to understand them on my own. See why I feel cranky? But I also love the Rebecca parallel because it's a great book and my sister also loved that classic so I might suggest this read for her too.

Overall: A really fun, flowing mystery with the ghost adding a great deal of tension.

Cover: It makes sense that there is a dead girl on the cover, capturing Kayla in her afterlife. Some jade green might have been a nice touch though.