The Ballad of Jessie Pearl 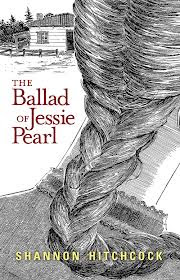 The Ballad of Jessie Pearl by Shannon Hitchcock
4/5 stars
Namelos, 2013
128 pages
YA Historical

I feel like I've read more than my fair share of books involving tuberculosis, a malady that is essentially eradicated in the developed world and thus something I am not personally familiar with. It's such a common disease throughout history and there really wasn't much that could be done about it. Maybe you'd get better if you were able to rest, able to breathe fresh healthy air but maybe you'd die anyway.

Well after that downer note, let's move on to this book, about young Jessie Pearl and actually inspired by the author's family history. Our heroine is fourteen years old with dreams of becoming a teacher in 1920s rural North Carolina but when her family is visited by TB, she sets that dream aside to take care of her family.

As you can see from my summary above, this book isn't a flashy paranormal or dystopia. It's a deceptively simple historical novel delving deep into Jessie's life and family relationships. Jessie was never very good at the household chores but with a deceased mother and as the only daughter still at home, she steps up to fulfill that job even though it is a sacrifice for her. It was interesting to read about this more community-minded instead of individualistic person as I feel like our modern culture tends to praise those who strike out on their own, pursuing what they want no matter the cost even if it includes living others behind.

The book is pretty quiet as the family is left mostly alone-tuberculosis is contagious after all and no one wants to spread it around the community. But we still get a little sliver of romance and hints of the modernizing outside world such as the presence of the Model T. Its strengths lie in the character sketches and the very real feelings it evokes as you are moved by their plight.