ARC Review: A Dash of Magic 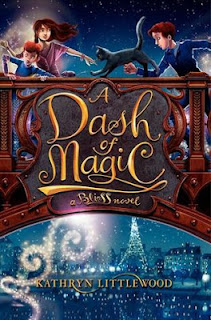 Source: Received an ARC from Jen Ryland/YA Romantics (thanks so much!)

Spoilers for book one as I'll recap it

My review of book one Bliss found me liking it but not loving it the way I wanted to; some of the elements were too cringe worthy and predictable to me. But I still liked the world and the concept so I was pleased to return. In the end, I liked this book a lot more and I am so glad to have had the chance to read it.

To recap, the end of Bliss featured Aunt Lily getting her hands on the family's magical cookbook and making dastardly plans with it. These plans have borne fruit in the opening of A Dash of Magic with Lily's talk show and general media empire continuing to bolster her power. Meanwhile Rose and her family live in a town lacking its usual magic with the absence of the book. Rose decides to confront Lily and challenges her to a bake-off at a famous French contest (yes, we're going to Paris!) Along the way, the family reunites with a grandfather, a talking cat, and a version of the book in need of translation as they rally together to beat Lily.

I really loved the structure of the book, how the story hinged on the daily baking contests. Although I don't watch many competition baking/cooking shows (they make me too anxious), I love the idea of them and getting to read about them was so fun. Additionally, contestants are allowed to bring in one special ingredient each day, which results in several hilarious mishaps around Paris as the kids visit some of the famous landmarks.

Another element I really like about these books is the importance of family. In this case, a long lost grandpa is reunited with his family. But this book also demonstrates how children can still have misadventures and mishaps even with good, concerned parents. While the parents are off searching for some ingredients, the kids look for others. At the end of the day though they are still a close-knit family who love each other deeply, which in turn is something I love to read about in books.

The book also has a great message about believing in yourself and your talents. Although Lily cheats, manipulates, and connives, Rose still stands strong against her for she has a true love of and passion for baking. It is pure and even though she doubts herself at times, the book ultimately affirms her commitment and honesty, leaving me feeling very good :)