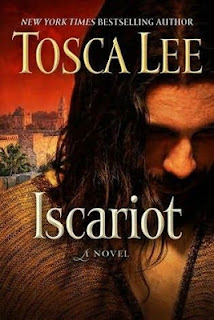 I read Lee's Havah previously, which focused on Eve and the Garden of Eden. I remember seeing at that time that Lee was working on a novel focusing on Judas Iscariot so I've been waiting for that to be released and it is finally here! Does Lee bring you to understand and/or sympathize with the traitor?

The beginning of the book certainly leads to empathy as young Judas' family is ripped apart in the face of Roman oppression. He lose his father and older brother while his mother turns to prostitution to keep them alive. As Judas grows up, he struggles with his feelings of guilt over his family's path. Then he hears about a mysterious Nazarene who with one look pierces Judas and brings him on an unforgettable journey.

By far my favorite part of this book was reading about Jesus (no surprise as my favorite biblical stories are also all about Jesus) in that Lee tells some of the familiar scriptural stories but as seen by Judas. The love that is Jesus brought me to tears several times-he heals leprosy, paralysis, and blindness. Judas' descriptions here bring home how revolutionary Jesus was and how he didn't meet the expectations of the Jewish leaders who were looking for a messiah. They wanted a man to take up arms and forcibly destroy Roman rule and instead they got a man who hangs out with lowly fishermen and the despised tax collectors and prostitutes, a man who talks in parables instead of learned language, and a man who does not bow down to them. Of course I already knew that I loved Jesus but I would say this helped me fall ever deeper.

What I didn't like about this book was the beginning focusing on the childhood of Judas just because I didn't really care. I can see how that was supposed to give Judas more depth and lay the foundation for why he eventually betrays Jesus but I really just wanted to read about Jesus' ministry.

Meanwhile I originally had disappointment about the ending, which I thought would force Judas to bear witness to Jesus' crucifixion (I might be a bit fuzzy on when he hung himself). When I read it for a second time, I was much more content. It is a meditative reflection with Judas recognizing that he will be remembered as a traitor but that Jesus still loves him. That Jesus does not conform to our pat assumptions and expectations but is instead so much more. That Jesus came for us.

Overall: A really fascinating book and recommended to read during the lead-up to Easter for Christians. What expectations of yours might be overturned?