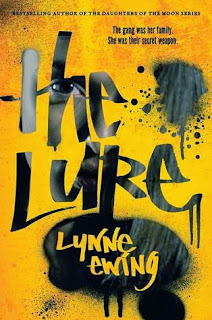 Well. When I first saw this book, my immediate question was "Who (what) is the lure?" The synopsis answered immediately that it is a beautiful young woman who lures rival gang members so they can be taken down by those in her gang. This sounded horrifically brutal but also uniquely different so I decided to give it a try.

While it seems to be a look at gangs, the lure portion is actually very small in my opinion. Main character Blaise has long prided herself on being tough enough with her attitude and not needing to rely on physical appearance to make her way through the gritty streets. But maybe halfway through the book, after her brutal initiation into a gang (the other girls beat her for a minute), she accepts the offer and her date with destiny is set.

This book was so far out of my comfort zone, beyond anything I could imagine. I mean, is this real life for some people? It blows my mind. How did Ewing conceive of such a setting-has she a journalist background or did she grow up such surroundings? Furthermore Goodreads lists this as a "gritty, sexy novel"-I can easily see gritty but who thought sexy was an appropriate adjective? Brutal, disgusting, horrifying are far more apt in my mind.

Because I don't want to be completely negative, I can mention a positive of this book featuring characters very low on the socioeconomic scale. One of the criticisms I've read about YA is a tendency to focus on middle/upper-middle class white kids but that is not the case here. The characters depicted here are poor and caught up in endless cycles of violence, gang affiliation, and retaliation. No one seems able to break free and many don't even feel a longing to do so. It's absolutely heartbreaking.

Overall: I would not recommend this book to anyone I know-if, in general, we share taste in books, steer clear of this one!