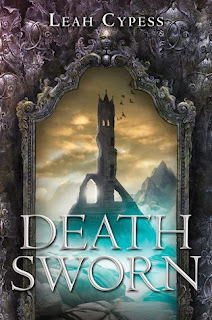 Source: Received an e-ARC through Edelweiss from the publisher in exchange for an honest review.

This was such a hard review for me to write because I liked this book but I didn't love it. I think there are a lot of cool ideas played with here and I read it pretty easily but I'm not left dying for the second book and I don't feel motivated to make people in my real life read it (the sure sign of a winner.)

The basic concept of this book is super cool. Ileni, the main character, is a sorceress whose power is diminishing and is basically sent as a sacrificial lamb to an underground tavern of assassins. She fulfills a treaty between their people, attempts to minimize the knowledge of magic that the assassins gain, and can investigate the death of the previous two wizards sent there. BUT, it's more complicated than that (isn't it always?) as Ileni comes to question her very upbringing, seeing the different philosophy of the assassins and how they are working to slowly chip away at an oppressive empire.

How can I describe Ileni? She's tough for sure with extensive reserves of inner strength. Her life has been dedicated toward increasingly complex magic but as she loses that ability, she loses the very essence of herself and she's not entirely sure what to do now. She's also flustered by a certain handsome assassin and his life, based around the Master's long-term plan and his ease at always facing death. She's clever, coming up with different strategies to compensate for her loss of magic and she's not afraid to ask questions as necessary. But she was a little tough to connect with for me-I don't know that I've ever had such a great talent as hers and thus have never had to lose such a thing. The other characters have some defining characteristics but do not receive the same definition.

I liked seeing the plot come together as answers were given while still setting up tension for the second concluding book in this duet. But I'm just feeling overall lackluster about it. You should give it a try if you've liked Cypess' writing before and if you want some fantasy in your life.