The Scarlet Pimpernel (with thoughts from @JenRyland)

Over the summer, the amazing Jen Ryland/YA Romantics and I decided to read a classic together, settling on the 1905 novel The Scarlet Pimpernel by Baroness Emmuska Orczy in anticipation of Diana Peterfreund's Across a Star-Swept Sea. We'd both read books that twisted the pimpernel story and I'd seen the 1934 film adaptation with Leslie Howard but we had no idea what to really expect. 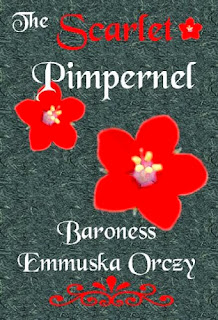 The Scarlet Pimpernel is a British man who has led many French aristocrats to safety, escaping the French revolutionary bloodlust and saving countless lives, leaving behind a card with a scarlet pimpernel as his trademark. Sir Percy Blakeney is a dull wealthy English baronet who somehow managed to win the heart and hand of Marguerite, the most beautiful and charming woman around. The two could never have anything in common or could they? For in actuality, they are one and the same with Percy cleverly using his dim-witted persona to hide his real identity. This book follows a French agent attempting to smoke out the Pimpernel once and for all, manipulating Marguerite into providing help by threatening her beloved brother.

Our immediate thoughts centered on the language, which is flowery, ornate, over-the-top, very theatrical, fitting its origin as a play. The characters are caricatured and defined by one or two traits that are hammered home over and over again. For example, Percy has thick blond hair and lazy eyes while Marguerite is beautiful, little, and childlike. Still it was easy to read and the plot moves crazy fast. We both feared muddling through some difficult Dickensian passages (he loved the look of his writing, just sayin') but once the book gets going, it keeps going with barely a chance to catch a breath. Again this fits perfectly with its theatrical roots and helps me to imagine how it might look on stage.

Historically it is a very exciting time with all the tumult around the French Revolution and the British desire for stability. Neither of us knows much about the period although we've read other books set during that time (for example A Tale of Two Cities and were able to make some comparisons to that excellent novel such as when the Scarlet Pimpernel disguises himself as a knitter, bringing to mind Madame Defarge's knitting.) Some real-life figures are mentioned but for the most part, it centers on the fictional. As I already mentioned, they're not very deeply-drawn. Though Percy has the secret life, which could potentially add many layers to his personality, they are not explored. Neither does Marguerite get much nuance to her personality. And if the main characters are so sketchily drawn, what hope do the secondary characters have? There are many small amusing moments with them like the British innkeeper who disdains the French but ends up unwittingly drinking with two Frenchmen in disguise.

One of the most interesting aspects ended up being how the pimpernel disguises himself as a Jew for his most daring escapade. As a Jew, he is considered the lowest of lows and the agents tracking him never consider that it could possibly be a disguise. It's a very clever idea, taking advantage of the unquestioned prejudices of those men. However it left me unsettled as I didn't feel it challenged the status quo of Jewish people being considered so low. Deanna Raybourn wrote a fascinating post about this and other instances of antisemitism in fiction.

Overall: I would say we had a lot of fun reading this and it might be good for reluctant classic readers if they give themselves some time to become accustomed to the writing. It is full of action and moves very quickly though the writing style very much dates it.

On Wednesday, Jen will be posting a review of Across a Star-Swept Sea by Diana Peterfreund, which will include some thoughts about its relationship to The Scarlet Pimpernel. And currently she is hosting an amazing giveaway. I'll be hosting one starting Friday too so you have two chances to win :)

If you'd like to give The Scarlet Pimpernel a try, it is available for FREE through Project Gutenberg. We'd love to hear your thoughts if you've read the book.