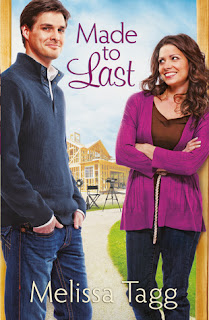 Sometimes you just need to take a break from your main reading interest and read something else. In my case, that meant stepping back from YA, which has largely left me feeling dissatisfied of late, and slipping in to Christian romance such as this book. I've read this genre on and off over the years as can be seen when looking through my review archive. It's been a few months and it was fun to be back.

Miranda "Randi" Woodruff hosts a homebuilding show whose ratings are threatened. To try to save the show, it is suggested that she finally introduce her husband, the one who taught her everything she knows. The problem? Said husband actually left her before they married and she never admitted the truth, pretending instead that the marriage went through. So they round up a fake husband and allow their "marriage" to be documented by journalist with something to prove Matthew Knox. The complications mount though as the two start to fall for each other while she also maintains her sham marriage and he digs deep for a dishy scoop that could resurrect his career.

When I mention complications above, boy do I mean that! As the book progresses, Randi's lies and men become increasingly entangled. While I trusted in a resolved happily ever after, I wondered how Randi would have the courage to confess her vulnerability and take the consequences. It was interesting to follow that journey. I liked both Randi and Matthew so it was easy to root for them as a couple and to follow especially their professional struggles. I initially though Randi was going to fall for her fake husband Blaze but his personality was so not compatible with hers. Instead we get Matthew who has a huge axe to grind with his father but is also just about the sweetest uncle imaginable.

As for the religious part, I thought it was pretty muted. Both have had church lives but are estranged from God at the beginning. Other Christians in their lives and their own circumstances drive them to Christ and to begin the process of rebuilding that relationship. I'm Christian so I'm not always the best judge but I didn't think it was preachy and it definitely wasn't filled with scripture if that's a concern to you. The only one I can remember being referenced is in Psalm 138.

I was disappointed about a few unresolved threads. There is a light focus on a competitor to Randi's show that is briefly addressed but I feel like more could have been said in that arena. Additionally Blaze's past is hinted at but never looked into; I can only assume that he'll be getting his own book or that lack of resolution will rankle me.

Overall: A perfect palate cleanser for me-giving me something I don't regularly read in a light sweet package. If you tend to like contemporary romances, you'll probably enjoy this one.