Once Upon a Time: New Fairy Tales 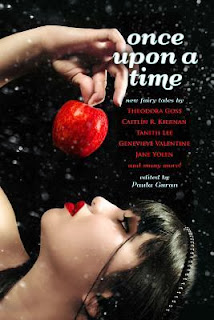 As has been long documented on this blog, I adore fairy tales in pretty much all iterations so of course I was going to take the opporutnity to read the new variations contained in this book. My usual policy for short story collections is to review each individually (just a few sentences) so be ready for a long one today because we have eighteen to cover.

"The Coin of Heart's Desire" by Yoon Ha Lee: This story is based on a Korean folktale so it was not one I was familiar with but it does have dragons and is very well-written. I was not expecting the ending but loved how it all panned out.

"The Lenten Rose" by Genevieve Valentine: This is based on The Snow Queen, a story I only vaguely know and I did not really like this retelling. I wonder if more familiarity with the original tale would have helped me here. I kept feeling like I was missing something...

"The Spinning Wheel's Tale" by Jane Yolen: This is an author whose name I've seen a lot but who I actually haven't read though several of her books are on my list. Here her offering is a short variation on the tale of Sleeping Beauty, looking at the innocent at the heart of the story. It's very short so it didn't make much of an impression on me.

"Below the Sun Beneath" by Tanith Lee: The Twelve Dancing Princesses was always one of my favorite stories as a kid so I just adored this elaborate retelling. Though the beginning left me wondering where we were going, I soon caught on and was thrilled with the feminist slant included. This was probably my favorite of the stories.

"Warrior Dreams" by Cinda Williams Chima: I admire the intention behind this story which looks at a contemporary soldier struggling to reintegrate himself to civilian life and being brought into a battle with some fantastical creatures. The writing for this never clicked with me and I had trouble staying engaged with the story.

"Born and Bread" by Kaaron Warren: I've never heard of the Russian story "Sivka Burka," which inspired this interpretation but I loved how it was rolled out here. I don't have much to say about it but this was another one I liked.

"Tales That Fairies Tell" by Richard Bowes: This was a weird take on Puss in Boots though admittedly that is never one of my favorite stories despite getting to live with an adorable cat who could totally rock boots if he so chose. I did not find much to impress in this story but I'm sure it will intrigue others.

"Sleeping Beauty of Elista" by Ekaterina Sedia: takes as a starting point a pediatric AIDS outbreak in Elista and weaves in a bit of Sleeping Beauty to shake things up. This one had a heavy air of melancholy over it but was beautiful all the same.

"The Road of Needles" by Caitlin R. Kiernan: Little Red Riding Hood is the inspiration here though it's a shaky one. I thought the ending pages were most excellent but the beginning is a bit of a slog in this sci-fi twist-there are many made-up words and terms thrown at the reader. I preferred focusing more on the familial relationship.

"Lupine" by Nisi Shawl: This was such a weird story beginning with a mother who hates her daughter. I liked how this eventually ended but hated the starting point :(

"Flight" by Angela Slatter: I was not familiar with either of the stories referenced by the author in her introduction this story, which made me nervous as I tend to like the retellings more when I know their source material. Still it was beautifully written and the start, middle, and end were clearly distinguished. I especially loved the use of the sister-sister relationship as well as mother-daughter when looking at two standout parts.

"Egg" by Priya Sharma: A woman is somewhat incautious when wishing for a child and having that wish fulfilled. The heartbreak is palpable in this story as the mother struggles with her daughter and ends up doing the difficult but right thing.

"Castle of Masks" by Cory Skerry: This was such a cool story. It owes a bit to Beauty and the Beast and has so many great moments. Another standout in the collection.

"The Giant in Repose" by Nathan Ballingrud: I enjoyed this story more upon giving it a second read as I initially found the story bewildering. When I read it the second time, I knew the characters better. I liked how it played with the Story, making me think of Mercedes Lackey's fairy tale novels where the Story will impel people to fulfill certain tropes.

"The Hush of Feathers, The Clamor of Wings" by A.C. Wise: Such a sad story with a brother who chose to remain a bird after his sister's sacrifice of silence and knitting a nettle shirt for each of her seven brothers; what will he give up for her to allow her to live?

"Eat Me, Drink Me, Love Me" by Christopher Barzak: I did not really like this retelling of The Goblin Market though I suspect this is one I'd have at least enjoyed if I was familiar with that poem. Instead I just kept reading hoping to eventually fall in love but never succeeding.

"The Mirror Tells All" by Erzebet YellowBoy: I loved how the starting point for this Snow White retelling is not about mother-daughter competition or jealousy but instead is about triumph in the face of those who would "try to stifle a young woman's spirit." I thought it was very neat how the elements of the original story were woven in.

"Blanchefleur" by Theodora Goss: I think this was the longest story in the collection and it ended up being one of the best too. It really honors the traditional fairy tales with the young man who no one much values, undergoing three trials, rescuing a kingdom, and learning from a mysterious frightening woman. It may have been a bit on the long side for this collection but the characterization really benefited from that.

Overall: I enjoyed this collection, finding more stories to enjoy than skip. If you like short story fairy tale collections, this would be worth checking out.