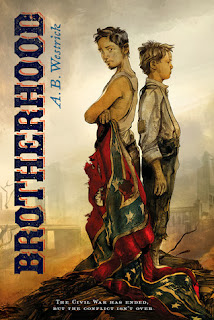 I'm sad not to have seen more reviews of this though not surprised as it is a historical novel, which tends to be one of the less popular genres in YA :( Its setting is the Reconstruction period and I can only think of two other books I've read involving that period. And it features the Ku Klux Klan in a somewhat positive light, which is historically accurate for the characters and settings but is difficult to read from a modern perspective.

Our main character is Shadrach Alfriend Weaver (quite a mouthful, right?), more commonly known as Shad, a fourteen year old, would-be tailor living with his widowed mother and older brother in war torn Richmond around 1867, bristling under Yankee domination. As a teenager, Shad is struggling with growing up, particularly what it means to be a man and he eagerly jumps at the chance to join a brotherhood of men committed to protecting Confederate widows and orphans as well as representing Southern pride. But when that "pride" turns violent, it challenges that which Shad knows to be right such as threatening his adventures in helping newly-freed slaves gain an education.

The big draw from the outset was the setting. The Civil War itself has proven far more popular for novels and I can see why but it makes me sad that this one is less well-represented because there's so much material and so many stories waiting to be told. It's also tricky though in choosing who to portray. Here we see some poor Southerners (who might be called white-trash) who still retain immense pride in their heritage and now have to confront such a different climate. As a proud American, I don't tend to have sympathy with the Confederate cause but this book brought me the closest I've ever been to seeing their point of view.

Shad in particular is an interesting protagonist. He is not well-educated and tends to think of himself as dumb because he has (undiagnosed) dyslexia and his brother is always held up as the model of manliness. Shad scorns his brothers hotheaded temper that makes him unemployable and wishes for his brother's inheritance in the family tailor business that cannot be changed to favor the second-born. He's extremely bigoted and prejudiced but manages to swallow that to accept education from African-American former slaves who complicate his preconceptions. He's also struggling with growing up and what it means to be a man. So frequently he justifies his membership in the KKK (as his tasks turn violent) as being what would make his father proud and that it's necessary to protect his mother. This in spite of doing things that rub against his conscience.

I probably ended up being most intrigued by the representation of the KKK, an organization which ostensibly had honorable motives but in practice was a terrorist organization attacking anyone they felt like (in this period, they're only shown harassing African-Americans and Yankees who come down to Richmond but their ire expanded to include immigrants, Catholics, and anyone deemed different as shared in the author's note.) Personally this also led to a great discussion with my friend and that's always high praise for a book.

So, we got an unusual setting, a male narrator/main character who experiences tons of growth and challenges to his world view over the course of the book, and a peek at a secretive organization. What are you waiting for? Go, give it a try!