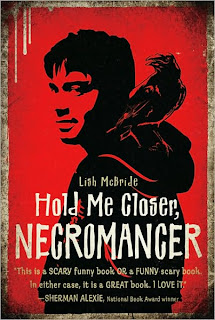 As I think back on this book, I actually have quite a few problems with it but the overall tone and style swept me away and kept me flipping those pages very quickly!  I was satisfied with the conclusion; there were just some problems along the way.

The book starts with Sam's perspective; it turns out he's a necromancer and he has come under the interest of Douglas, a powerful necromancer who brooks no competition.  Most of the story is told from Sam's perspective but occasionally it shifts to third-person to examine other characters mainly Douglas although some other characters briefly are the focus.  I can handle books with shifting perspectives but it was too inconsistent for me.  Brid, a were-human, is the focus of a couple of chapters and then it just ignores her.  Other characters only have their perspective highlighted once toward the end; I just didn't see the point of that.  If it couldn't be told from the point of view of the characters already established, then maybe it needs to be rethought.

Douglas is super evil: ambitious, cruel, and supposedly super-smart.  Yet in the final showdown he seemed to not notice that Brid's cage was empty despite it being big and in the center of his basement.  I did not believe that this intelligent man would not notice that rather important circumstance.

There were also some threads left hanging such as Ramon, Sam's friend who is injured, and questions about Sam's family, who are also strong in necromancy.  I want to know that they will all be okay.

Other than that though, this was a quirky (and fast-moving) novel touching on family ties and all sorts of cool paranormal creatures and abilities.

Cover: The crow is important but I think Sam looks a little smug, which is not in character.
Posted by The Insouciant Sophisticate at 12:01 AM