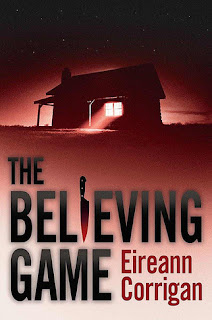 I was very drawn in by the knife on the cover (which is totally relevant to the plot although it's kind of a spoiler so I can't tell you exactly how) and knowing my love for contemporary books and stories about cults, I decided to try this one out.

Greer has issues, to say the least. She struggles with food and she's a bit of a maneater but most troublingly to her parents is her penchant for shoplifting and the fact that she keeps getting caught. So she is sent off to McCracken Hill, a place for troubled teens. There she stays in isolation until drawn out by the mysterious Addison. He's smart and well-spoken and really close to his NA sponsor Joshua. But if Greer wants to be with Addison, then she'll have to play the believing game as she and other students are drawn into Joshua's web.

I guess my biggest problem with Greer was how blinded by Addison she was and how desperate she was to keep him, so much so that she looks past a lot of red flags from Joshua. The way she subordinated herself to Addison was so creepy even though I knew about her previous problems.  Furthermore she was so resistant to being helped through therapy and it just broke my heart-I always want to heal the characters I read about especially when they're in such bad situations.

The way everything escalated was very intense..building at a slow pace until the big finale. I did not expect that (and the epilogue was honestly a bit of a disappointment to me) but I can see how it all fits together (sorry for vagueness).

Overall: This was just an okay read for me-if you like reading about manipulative people, you'll get that here.