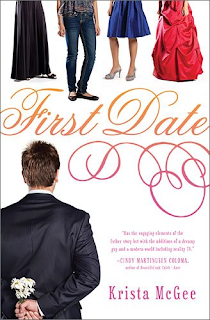 This book just sounded right up my alley: light and fluffy and then I discovered that it was a retelling of Esther, which added another dimension.  In this version main character Addy is a Christian who is chosen to compete on a reality TV show to win a prom date with the president's cute son. Doesn't this book sound exactly like something I'd like?

And I did like it. Addy is a shy girl most concerned with academics, not fashion and boys, setting her apart from most of the girls on the show. Further differentiating her is her religion, modesty, and dislike for the spotlight. However that is exactly what the audience loves about her, infuriating the controlling unethical producer of the show as well as many of the greedy, grasping girls.

I was able to read this pretty fast because, for the most part, it just flowed. I think you will be able to predict what's going to happen based on your knowledge of the book of Esther and YA books in general-nothing really took me by surprise. But I especially loved Addy's relationship with her parents. Now they're dead and have been for most of her life after a disastrous ending to their missionary life, but Addy receives her mother's journals and learns more about their faith, which encourages her in her path.

The characters aren't very developed: Addy is practically perfect if a bit annoying at times while the other characters are pretty one-dimensional.  They are either good or bad, supporting Addy or trying to tear her down with little depth beyond their relationship to Addy. They don't stand alone to distinguish themselves with unique personalities.

I mentioned the Christian aspect above, which I did not think was overwhelmingly strong but if you don't like stories with that element, then you'd be better off skipping.