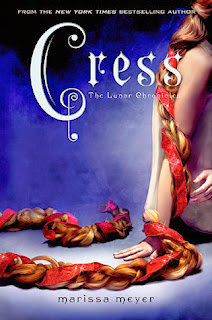 Though Cinder did not impress me the way I had hoped it would, Scarlet completely changed the way I felt about this series, bringing me to the point of rabid fandom. Though I knew I wanted to check out third book Cress, I was also nervous. Meyer seemed to be adding new characters in every go-around and I worried it would feel too packed and some would end up overlooked. Happily that was not the case for me because I thoroughly enjoyed this third installment and am eagerly anticipating Winter's release next year.

*SPOILERS FROM THE FIRST TWO BOOKS*

As in the previous books, this one weaves in a new fairy tale, this time "Rapunzel" as you might be able to guess from the cover. Our titular character is Cress, who is an ostracized Lunar girl, raised in captivity and considered valuable for her technological skills. Our intrepid crew of Cinder, Scarlet, Wolf, and Thorne have grabbed her attention and despite her mistress's demand to find them, Cress has instead protected them. A chance communication leads to a bungled rescue mission with the five scattered: Cinder and Wolf crash land and reunite with Dr. Erland, Cress and a now blind Thorne crash in the Sahara, and Scarlet is captured by the Lunars. Meanwhile Kai is desperately trying to protect his people as his marriage to the evil Lunar Queen draws near. So basically there's a lot going on.

I really fell for Cress in this book. She's so innocent and naive, a total dreamer and I could fully sympathize with her longing for a hero as she decides Thorne fits the bill. But don't underestimate her! She's got the brains and nerve to play a big role in Cinder's plan to thwart Kai's marriage and I anticipate her being very important in book three. Of course, with the emphasis of Cress we spend a lot less time with the other characters particularly Scarlet who is completely separated from the characters we know. However I continue to be impressed with how Meyer skillfully weaves threads and ties everything together. I look forward to seeing the grand finale in Winter.

On the one hand, this book did seem a little long. Have you seen it in person? It's a veritable doorstop. And I'm not always sure that each scene furthered the main plot. But on the other hand, there are so many character scenes especially between Thorne and Cress that add to the richness of the world. I just want to hang out with them and follow all of their little adventures that contribute to the overarching plot. Did anyway else feel this push and pull while reading?

Overall: You should read this BUT only if you've read the first two books as I'm not sure how much sense it makes otherwise. Then you can join the rest of us in counting down the days until the conclusion arrives!